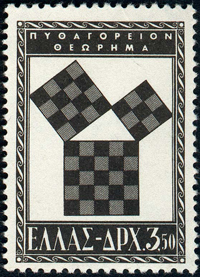 Pythagoras (Pythagoras of Samos), was born on the island of Samos, Greece around 569 BC, and is known as the first pure mathematician of all time.

He was well educated, and he played the lyre throughout his lifetime, knew poetry and recited Homer. He was interested in mathematics, philosophy, astronomy and music, and was greatly influenced by Pherekydes (philosophy), Thales (mathematics and astronomy) and Anaximander (philosophy, geometry).

Around 530 BC he moved to Croton, a Greek colony in what is now Italy. There he founded a philosophical -religious cult, the Pythagoreans, who believed that the universe is based on numbers.

In spite of all this fuss, we have no idea whether Pythagoras actually proved his theorem. In fact, we don’t know whether it was his theorem at all. It could well have been discovered by one of Pythagoras’s disciples, or some Babylonian or Egyptian scientist. But Pythagoras took all the credit, and his name remained throughout history. Whatever its origins, the theorem and its consequences have had a gigantic impact on human history. And that’s why we present it to you today.

It has been taught for more than 2000 years, and has even become part of popular culture. There are
Pythagoras cartoons, T-shirts, cheesy math jokes, a Greek and a Surinamese (!) stamp.

The Greeks did not express Pythagoras’s theorem as an equation in the modern symbolic sense. That came later with the development of algebra. In ancient times, the theorem was expressed verbally and geometrically.

Around 250 BC Euclid became the first modern mathematician when he wrote his famous Elements, the most influential mathematical textbook ever, in which he included the Pythagorean Theorem.

The Pythagorean Theorem, states that in a right-angled triangle the area of the square on the hypotenuse (the side opposite the right angle) is equal to the sum of the areas of the squares of the other two sides

If now you are in a mood of using this theorem, you can hit the “Solve” button on this page, and try the fxSolver by yourself. It’s easy, fast and absolutely free!

Disruptive Innovation in the field of math equations...the vision of fxSolver