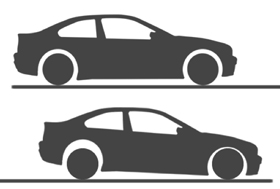 Weight transfers occur as a result of the chassis twisting around the car’s roll center, which determined by the natural suspension setup. When accelerating, braking or steering, the body of the car rotates in the opposite direction, which compresses the suspension on one side of the car, while releasing the weight on the other side.

When you accelerate, the weight of the car is thrown backwards. This causes the rear suspension to compress slightly and increases the available grip at the rear tires.

Cars can brake much harder than they can accelerate. Weight transfers under braking are thus more likely to affect the balance of the car.

Where Δw is the change in load borne by the front wheels, α is the longitudinal acceleration, h is the center of mass height, w is the wheelbase, and m is the total vehicle mass.

You can use fxSolver to solve this or find related formulas. Also, you should definitely try our Plotting Tool

Weight transfer involves the actual (relatively small) movement of the vehicle Centre of Mass relative to the wheel axes due to displacement of the chassis as the suspension complies, or of cargo or liquids within the vehicle, which results in a redistribution of the total vehicle load between the individual tires.

There is a Greek Supercar prototype named Korres P4.
It is the first car that can travel on both dirt and pavement at high speeds. That is achievable due to its groundbreaking suspension system, invented by Mr. Korres.
You can read the whole fascinating story, in Novascientia’s Blog.