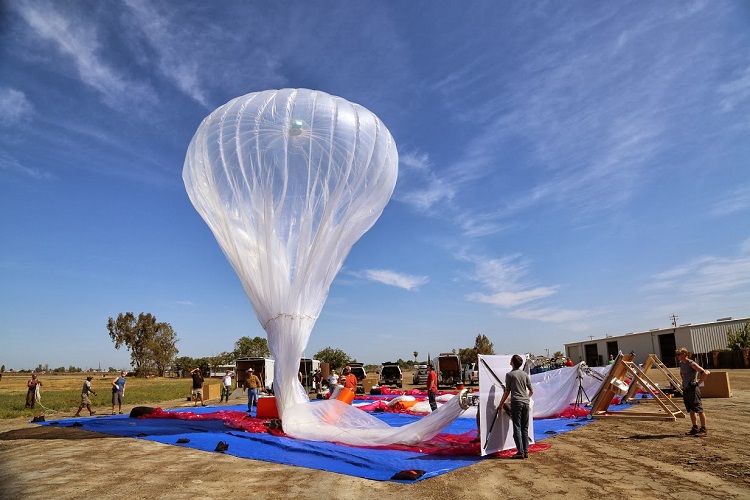 Have you ever heard of Project Loon? It has nothing to do with Looney Tunes or Rap music.
It is a huge Google Project, which has as a goal, to give internet access to everyone on the planet, no matter where they live.

There are areas on Earth, without phone lines or mobile phone antennas. Although, people live there and Google want to give them internet access. How they are planning to do so? With Air balloons! Yup! Router wielding Balloons! Sounds awesome right?
The project uses high-altitude balloons placed in the stratosphere at an altitude of about 32 km (20 mi) to create an aerial wireless network with up to 4G-like speeds. It was named Project Loon, since Google itself found the very idea of providing internet access to the remaining 5 billion population quite unprecedented and crazy. Each balloon can provide connectivity to a ground area about 40km in diameter using a wireless communications technology called LTE or 4G.
Well, it is! And this video will give you the main idea, better than me:

Last week Google,  announced that the project will kick off in Indonesia, sometime in 2016. The country has 255 million population which makes the project definitely challenging.

In Equations now!
After I found this subject, the fxSolver team found and added to our database, the Hot Air Balloon Lift equation, which can be used as a Balloon Lift Calculator! Just hit this link, and hit the "Solve" Button!
The hot air balloon is the oldest successful human-carrying flight technology. It consists of a bag called the envelope that is capable of containing heated air.
The heated air inside the envelope makes it buoyant since it has a lower density than the relatively cold air outside the envelope. As with all aircraft, hot air balloons cannot fly beyond the atmosphere. Unlike gas balloons, the envelope does not have to be sealed at the bottom since the air near the bottom of the envelope is at the same pressure as the air surrounding. For modern sport balloons, the envelope is generally made from nylon fabric and the inlet of the balloon (closest to the burner flame) is made from fire resistant material such as Nomex.

The equation is this one on the left, with L the Balloon payload lift (kg), Palt the atmospheric pressure at operating altitude (pascal), V the envelope Volume (m3), Rs the specific gas constant, Tamb the ambient temperature (in Kelvins), and Tenv the Envelope temperature.

Calculate the Hot Air Balloon lift, and use it as you like! We want to believe that we helped you fly!

For everything else, you will find some help in our fxSolver video.
Also remember to follow or interact with us in our social media pages. You will find links below.