Laser Razor and Wavelenghts of light 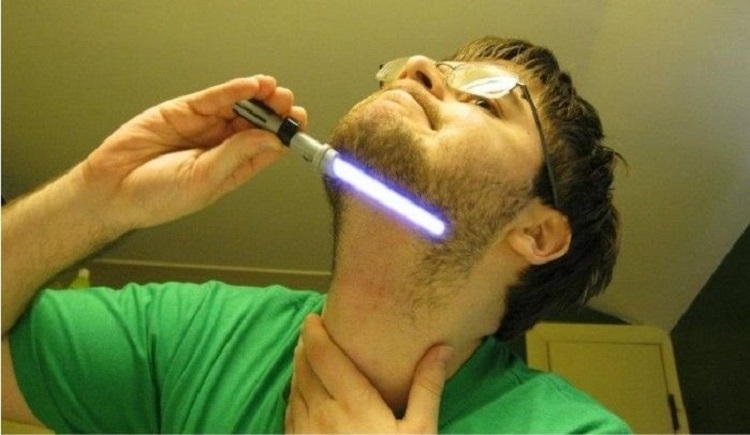 More lasers this week, after the Laser Cutting post! Why? Because there is a new, futuristic gadget spreading over the internet these days. It is a shaving razor, but without… a steel razor. It has a laser. Yes, a laser, that cuts off hair, smoothly, precisely and painlessly.
How it works?
Wavelengths of light had already been discovered that could cut through dark hair, but finding a way to cut light hair was proving incredibly difficult. After years of research & development, they discovered a chromophore in the hair that would be cut when hit with a particular light wavelength.
Chromophores are particles that absorb certain wavelengths (colors) of light.
This chromophore they identified is shared by every human, regardless of age, gender or race.
With a quick search in fxSolver with the term “wavelength of light”, I ended up reading about Rayleigh Scattering – Intensity of Light from molecules and Snell’s law of refraction.

We have already talked about Rayleigh Scattering and the intensity of light, and Cross section.

Snell’s law (also known as the Snell–Descartes law and the law of refraction) is a formula used to describe the relationship between the angles of incidence and refraction, when referring to light or other waves passing through a boundary between two different isotropic media, such as water, glass, or air. In optics, the law is used in ray tracing to compute the angles of incidence or refraction, and in experimental optics to find the refractive index of a material. The law is also satisfied in metamaterials, which allow light to be bent “backward” at a negative angle of refraction with a negative refractive index.

When a ray of light hits the boundary between two transparent materials, it is divided into a reflected and a refracted ray. The law of refraction states that the refracted ray lies in the plane of incidence, and the sine of the angle of refraction divided by the sine of the angle of incidence is equivalent to the ratio of the wavelengths in the two media.
(The wavelength of a sinusoidal wave is the distance over which the wave’s shape repeats. Wavelength depends on the medium that a wave travels through).

Go ahead, check these equations and search whatever else you want to solve. You will find some help in our fxSolver video.
Also remember to follow or interact with us in our social media pages. You will find links below.

Laser Cutting and the Gaussian beam