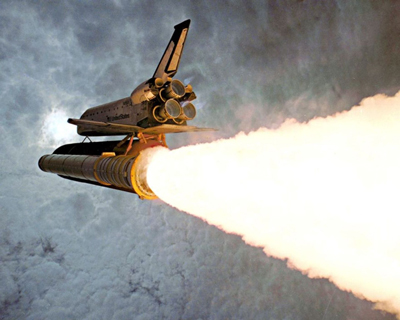 Back in the 60’s everything was about space travel.
NASA needed to find a way to lower the cost of manned space exhibitions. They figured that they should try to make a maneuverable space craft, so the astronauts can land it wherever they desire. This would cut the costs of the “rescue team” which was waiting the craft to drop, and needed to cover hundreds of ocean square miles, and it would make the craft reusable. If they could manage that, it would be a massive budget cut.
Till then, the returning space craft had been cone shaped, and it was reentering blunt end first (1), lacking maneuverability. Using a ballistic reentry trajectory like a Command Module, the landing footprint was an area with the size of California
Turning the cone around (2), or making it more slender (3), didn’t really help, due to overheating and the absence of the desired maneuverability.
The next modification was to slice the cone lengthwise(4).

That way, the pressure on the top was reduced and the pressure on the bottom was dominating, providing more aerodynamic lift and greatly reducing drag.
And it was a great idea. But still needed more to function.
In order make the shuttle land like an common airplane, they needed to make it shallow and broad. Pretty much like a bathtub.
And they did. They made it wider and flatter, and add some tail surfaces to help the pilot controlling the plane (5).
Just like that, the Lifting body became reality, and some years later it evolved to the Space Shuttle we all know.
Apart from landing wherever its pilot wants, the Shuttle could move into space fluently. Its movement was based in this equation:

The Tsiolkovsky rocket equation, or ideal rocket equation describes the motion of vehicles that follow the basic principle of a rocket: a device that can apply acceleration to itself (a thrust) by expelling part of its mass with high speed and move due to the conservation of momentum.
It relates the delta-v (Δv=the maximum change of speed of the rocket if no other external forces act) with the effective exhaust velocity (Ve) and the initial and final mass of a rocket (or other Shuttle) (m0/m1).

Don’t forget, that you can Add the equation to the fxSolver and get one step closer to space travel, with just a few clicks!
Also, remember to follow our social media pages, by hitting the buttons below!