Sound pressure or acoustic pressure is the local pressure deviation from the ambient (average, or equilibrium) atmospheric pressure, caused by a sound ... more

The power factor of an AC electrical power system is defined as the ratio of the real power flowing to the load, to the apparent power in the circuit. In a ... more

Latent heat is the energy released or absorbed by a body or a thermodynamic system during a constant-temperature process. A typical example is a change of ... more

Power of a point

The power of a point is a real number that reflects the relative distance of a given point from a given circle. It is related to the distance from the ... more

In mathematics, the root mean square , also known as the quadratic mean, is a statistical measure of the magnitude of a varying quantity. In a balanced ... more

Block and tackle - effort required to raise a given weight

A block and tackle is a system of two or more pulleys with a rope or cable threaded between them, usually used to lift or pull heavy loads.The formula used ... more

Thrust-to-weight ratio (TWR) is a dimensionless ratio of thrust to weight of a rocket, jet engine, propeller engine, or a vehicle ... more

In electronics, gain is a measure of the ability of a two-port circuit (often an amplifier) to increase the power or amplitude of a signal from the input ... more

Calculate the force the biceps muscle must exert to hold the forearm and its load as shown in the figure below, and compare this force with the weight of the forearm plus its load. You may take the data in the figure to be accurate to three significant figures. 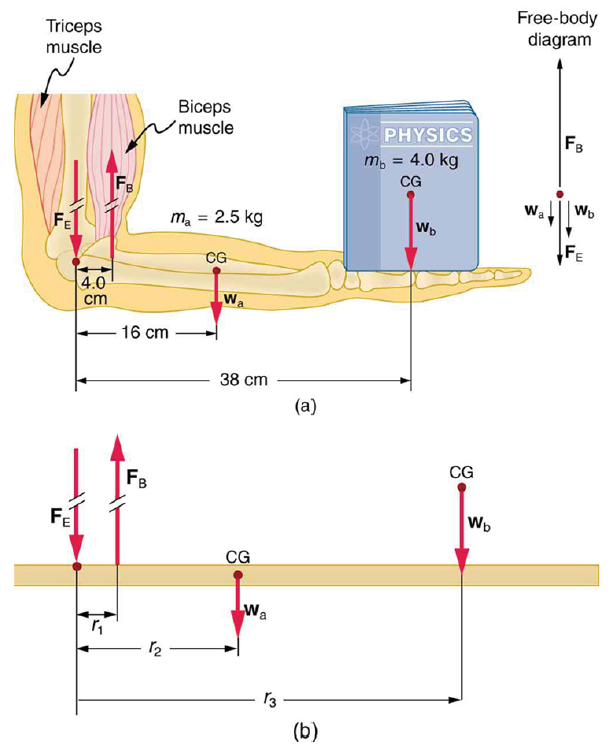 (a) The figure shows the forearm of a person holding a book. The biceps exert a force FB to support the weight of the forearm and the book. The triceps are assumed to be relaxed. (b) Here, you can view an approximately equivalent mechanical system with the pivot at the elbow joint

There are four forces acting on the forearm and its load (the system of interest). The magnitude of the force of the biceps is FB, that of the elbow joint is FE, that of the weights of the forearm is wa , and its load is wb. Two of these are unknown FB, so that the first condition for equilibrium cannot by itself yield FB . But if we use the second condition and choose the pivot to be at the elbow, then the torque due to FE is zero, and the only unknown becomes FB .

The torques created by the weights are clockwise relative to the pivot, while the torque created by the biceps is counterclockwise; thus, the second condition for equilibrium (net τ = 0) becomes

Note that sin θ = 1 for all forces, since θ = 90º for all forces. This equation can easily be solved for FB in terms of known quantities,yielding. Entering the known values gives

Now, the combined weight of the arm and its load is known, so that the ratio of the force exerted by the biceps to the total weight is

This means that the biceps muscle is exerting a force 7.38 times the weight supported.